The most significant environmental impact of printers comes from their production phase, as well as the use of consumables when printing [1]. Although increasingly evident, the problem has not yet received much regulatory attention.

A voluntary agreement, which was signed with industry back in 2011 in order to avoid regulation in favour of aspirational targets, focuses nearly exclusively on their in-use energy consumption. However, a technical study carried out to review this agreement in 2019, found that we need to go a step further and address the resource efficiency of printers too [2].

On durability, reparability and recyclability of printers

The production impact of printers is very significant, which means that it is essential to use them for as long as possible. Unfortunately, the average lifetime of printers today is just four to six years and this lifespan is expected to decline in the future [3]. Consumer complaints suggest that many inkjet printers are thrown away after a lifetime of two to three years, with some being in use for as little as six months before they become e-waste.

Consumer printers are usually cheap, in large part because the industry’s dominant business model is based on expensive consumables such as paper or cartridges. Some of the most commonly used brands of ink, for example, come at a staggering price of over €4.500 a litre, which is enough to purchase some 75 colour printers [4]. When replacement cartridges cost as much as the printer, users often find themselves motivated to discard their appliance in favour of buying a new one after the first set of ink cartridges is used up [5].

The manufacturing cost of printers today is often minimised by using the least durable materials and components possible. In this case, repairability quite naturally comes as a low design priority. This means that such common problems as print head failures can rarely be fixed because of integration of components in the main body of the printer.

Shorter lifetime of a printer is sometimes due to purposeful design too. Such “planned obsolescence” takes place when a service alert is generated after a set number of pages had been printed, requiring a special code for reset or a repair to be carried out at the service centre [6]. Moreover, recent investigations by the recycling organisation EuRIC have highlighted design practices that inhibit recycling of printing machines. These include difficulties in removing scanner lamps, presence of flame retardants in plastics, and removal of cartridges when no power is supplied to the machine [7].

Cartridge: a throwaway product by design?

Printers, then, are evidently designed to fail. To top it off, poor performance of cartridges is also a major problem for both consumers and the environment. The number of pages printed before a cartridge needs to be replaced can be disappointingly low compared to manufacturer estimates. Many printers use up only half or less of their ink, with extreme cases reportedly displaying low toner message with as much as 80 percent of ink still intact. The EU consumer organisation BEUC reports that 42% of tested ink and toner cartridges had excessive ink residue whenever the printer provided a notification that they were empty [8].

Meanwhile, the performance of the less costly, reused (i.e. returned and remanufactured) cartridges is often inhibited by manufacturers themselves. Automatic firmware updates on printers have in some cases been found to trigger the rejection of non-original cartridges [9]. In other cases, chips – sometimes referred to as “killer chips” – were detected, programming cartridges to work with full functionality only at first use. This results in refilled cartridges being discarded and consumers forced to buy original-only ink supplies.

In Europe, it is estimated that around 60-70% of all cartridges end up in landfills or are incinerated after a single use. A further 10-15% are collected and processed by companies, and the rest is refilled or remanufactured. Of the cartridges returned to manufacturers, less than 3% are reused, and while around 75% of the materials are recycled into new products, a number of producers reportedly incinerate the majority of their returned cartridges [10].

The poor durability and high cost of repair turn printers into nothing but disposable commodities. Added to this, cartridges are expensive and have high environmental impacts. Unfortunately, the problem is not addressed by the current regulatory approach.

Is it a hopeless case? Not at all – the solution is within reach. The European Commission needs only to turn the existing voluntary agreement into a comprehensive legal instrument as soon as possible. This would present a real chance to address the wider environmental impacts of imaging equipment consistently across the market, and to prevent the planned obsolescence of printers and cartridges. Printing will never be green but it can surely become much more resource efficient. 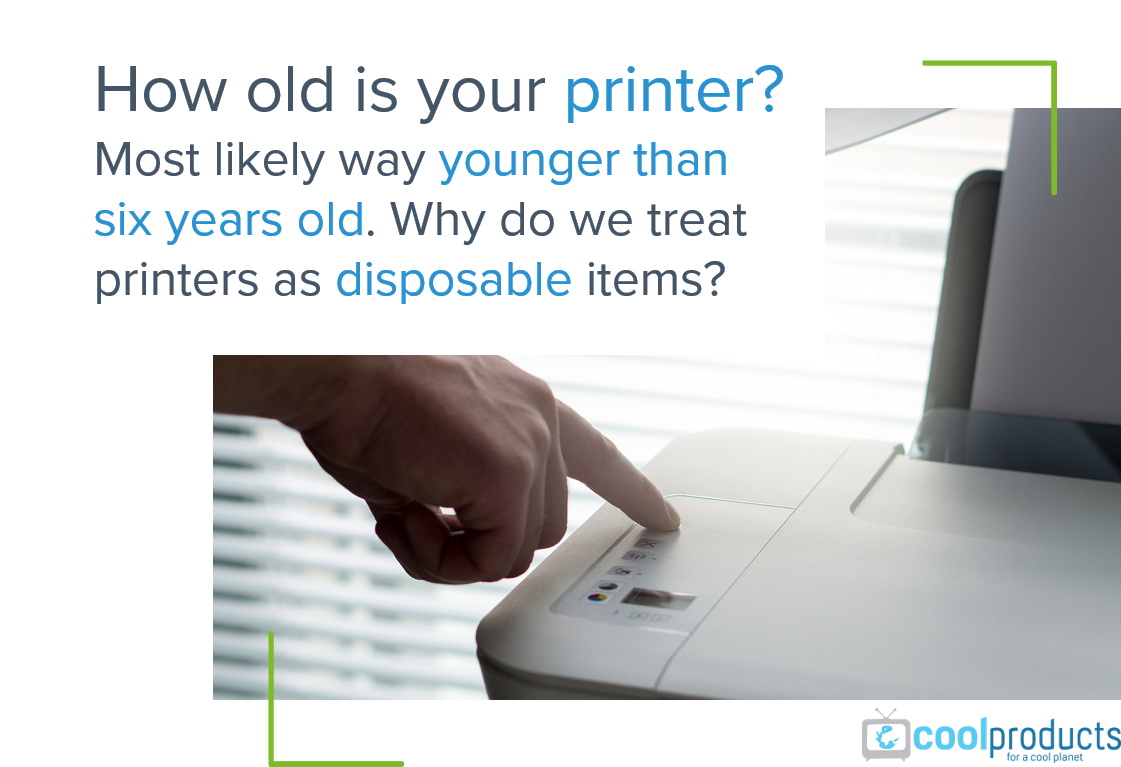 [3]  Technical Study on the Revision of the Voluntary Agreement on Imaging Equipment (Draft), 2019, https://www.review-imagingequipment.eu/documents

[5] Using HP ink prices as in May 2019 and average price for colour MFD device as per the Technical Study on the Revision of the Voluntary Agreement on Imaging Equipment (Draft), 2019, https://www.review-imagingequipment.eu/documents

[8] Contributions to the meeting on the Voluntary Agreement on Imaging Equipment, Emmanuel Katrakis of EuRIC, 25 April 2019

[10] Technical Study on the Revision of the Voluntary Agreement on Imaging Equipment (Draft), 2019, https://www.review-imagingequipment.eu/documents