Negotiations for energy and resource efficient products including TVs and fridges will go ahead despite delays, the European Commission said this week. Consumers could soon benefit from mammoth savings, but only if EU governments will give them the green light by the end of the year.

This week the European Commission seemed ready to scrap long-planned Ecodesign and Energy Labelling requirements for several products, according to anonymous sources within the EU executive. President Juncker and Secretary General Selmayr were threatening to halt product policy development behind closed door, the sources said.

But the negotiations will go ahead following pressure from MEPs, environmental and consumer groups, as well as some progressive countries and businesses. The proposals are safe for now, and if everything goes according to plan they should be voted on by EU governments before the end of the year – though there are still uncertainties on the exact number of measures to be voted on.

Rarely has any EU environmental law brought together so many different players united in the quest to cut waste and energy bills. That’s why any further delay in its implementation cannot be justified.

The proposed requirements are part of a package of Ecodesign and Energy Labelling measures, which would oblige manufacturers to produce electrical goods that do the same job while wasting less energy. The proposals would also help reduce waste and save resources thanks to provisions to make products more easily repairable and recyclable by design.

The proposed energy efficiency requirements alone, which if approved in their entirety would cover 16 products, [1] can save an additional 62m tonnes in CO2 emissions a year. Apart from the obvious climate benefits, this would also make Europe less dependent on energy imports given current geopolitical uncertainties and potential for volatility in fossil markets.

The adoption of these measures is also expected to save consumers and businesses €23bn in reduced energy bills per year starting from 2030.

Yes, Ecodesign truly is one of Europe’s success stories. But there’s more.

The proposed resource efficiency requirements would make it easier for consumers to have certain products repaired instead of having to buy new ones. The measures would reduce waste while unleashing the potential of job creation in the sector. That’s not a given, considering that now consumers are forced to discard products, as repair is either impossible or unaffordable. [2]

The European Commission is now expected to notify the World Trade Organisation (WTO) about the proposals, which would lead to a gradual phase out of the most wasteful products from the EU’s single market including imported goods.

The European Commission must send their proposals to EU governments who are then expected to vote by the end of the year. While supporting energy efficiency requirements, some countries are set to oppose proposals to improve repairability and recyclability, Coolproducts campaigners revealed last month.

According to their statements during previous meetings, Germany, Italy and the UK are currently hampering the resource efficiency proposals, while France, Poland and Spain are either completely disengaged or have adopted a neutral stance. Because of the heavy weight their votes carry, the proposals are likely to be dropped from the agenda if their positions don’t change. [3]

Europe has the potential to do much but cannot do it without national governments.

Both the European Parliament and the Council have already called for a timely implementation of the Ecodesign measures, which have suffered from several delays and political attacks from the Eurosceptic press.

The ball will  soon be in the member states’ court provided that the European Commission convenes the meetings for the votes in time. Should they reject the proposals, EU citizens will only have their governments to blame.

[2] Want to know more about what Ecodesign can do to boost repair? Check out this recording from our latest webinar 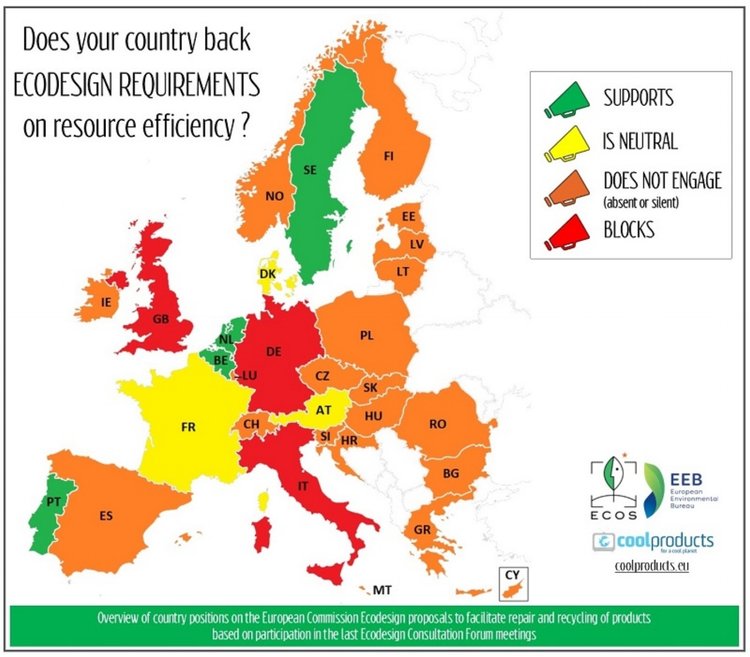