Major industry lobby groups have pushed the European Commission to abandon plans for longer-lasting products despite increasing public support. But EU governments can still rescue the proposals during key votes in December and January.

The European Commission has considerably weakened proposals that would oblige manufacturers to make home appliances easily repairable and longer-lasting by design. The move follows increasing pressure from major appliance lobby groups which goes against support for these measures from citizens.

Tech companies – including Apple and other brands represented by powerful lobby groups such as Applia, Digital Europe and Lighting Europe – have made it increasingly difficult and expensive to fix their products or replace key components.

Hampering repair can help to drive sales. But this comes at the expense of people and the planet, according to a coalition of NGOs led by the European Environmental Bureau and ECOS.

A blow to consumer rights and the economy

The weakening of the proposals is a big blow to consumers, who are tired of wasting money on products that are designed to become waste prematurely.

A recent study conducted for the European Commission itself found that most EU citizens would like to buy repairable and durable products while also receiving more information on repairability at the point of sale. The study reveals that consumers feel repair is often too expensive or difficult.

In 2014, another EU survey found that 77% of citizens would like to fix their products rather than buy new ones,  but again the high costs and low availability of repair services are the main barriers.

This is also a huge loss for the world’s economy. The total value of all raw materials present in e-waste was almost €55 billion in 2016 – more than the entire GDP of Bulgaria. In Europe, the original proposals could also result in thousands of new jobs in the repair sector.

An environmental timebomb waiting to explode

Europe is not prepared to deal properly with the increasing amounts of potentially toxic e-waste. Dumpsites are overflowing. Recyclers can’t keep up, a reason why scrap is sometimes shipped illegally to developing countries where they may be treated in unsafe conditions.

In Europe, only 35% of e-waste is reported as properly collected and recycled.

The United Nations have warned of a major threat to the planet and human healthlinked to e-waste. Recently, flame retardants have been found in children’s toys and consumer goods made from recycled plastics.

E-waste is the fastest growing waste stream in the world and it’s estimated to reach almost 50 million metric tons in 2018. 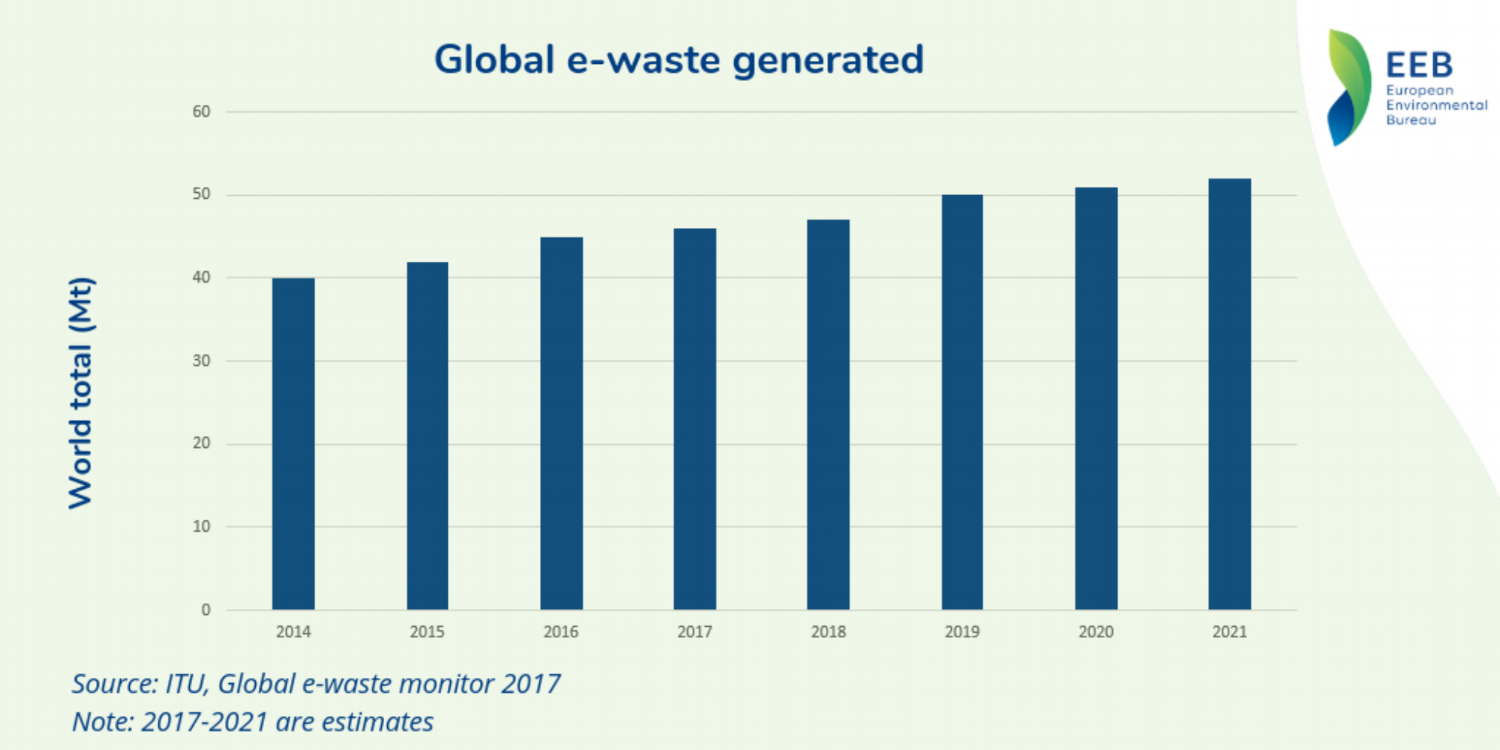 In September 2018, the European Commission drafted laws to:

For the first time, Europe was putting forward requirements that had the potential to transform the way we produce and use white goods. NGOs hailed the proposals as a victory for consumers and the environment, hoping to set a precedent for more products and requirements.

But after being revised by the Commission this month, the proposals now conveniently mirror the language of the industry and its demands. See changes to the text and proof of industry lobbying here:

See changes to the text and proof of industry lobbying

Summary of the most significant changes

1) Provisions for a better design that facilitates repair through the non-destructive disassembly of key components have been replaced with provisions targeting recycling through the ease of dismantling at end of life only. This will make it easier to destroy and recycle a machine, not fix it.

In addition, in the case of displays and TVs, essential provisions prohibiting the use of halogenated flame retardants in plastic enclosure have been deleted. These chemicals place an additional barrier to developing high quality recyclates. They are also known to disrupt thyroid function and cause neurological and attention deficits in children.

“We pay the price for each unrepairable product that’s put on the market.

People are tired of wasting money on products that are designed to become waste. EU officials are aware of the societal benefits of responsible design, and yet they have caved in to pressure from the industry.

At stake are also thousands of new jobs in the repair sector as well as resource and carbon emission savings resulting from more responsible production patterns.

It’s time to put the rights of the people and climate action over corporate profits. We need to end such obsolete and shady business models.”

“European decision-makers have a unique opportunity to overcome key obstacles to repair. The ball is now in EU member states’ court, that’s why we’re urging them to reinforce the provisions. It’s time to put political hesitations aside and show cosnumers that Europe is here to help them.”

“When fixing items is actively discouraged by manufacturers, repair becomes a political act.”

The proposals are expected to be discussed by EU governments from 10 December onwards, before being officially adopted. The EU’s environment and industry ministers can therefore still change the content of the proposals.

However, some of them were already set to oppose ambitious repairability standards,NGOs revealed in September. These include Germany, Italy and the UK, countries in which ongoing petitions have reached hundreds of thousands of signatures.

Dates when EU governments are expected to vote:

The Right to Repair explained in the media

Repair is as important as innovation (The Economist)

Can we fix it? The repair cafes waging war on throwaway culture (The Guardian)

What should I do with my broken kettle? (BBC)

The proposals are part of the EU’s plans to reduce the environmental impacts of products (Ecodesign Directive).

Over the last twenty years, ecodesign policies have largely focused on energy efficiency, improving domestic and industrial products by making them perform better with less energy. This radically cuts household and business energy bills and lowers the energy intensity of our economies, even as they grow.

Progressive policy-makers are now trying to take it a step further, to make sure that they also last longer, and are easier to repair and recycle. The European Parliament, alongside consumer and green groups, have strongly supported the better integration of resource concerns in the ecodesign policy.

UPDATE: This article was updated on December 4 to clarify that Bosch does offer some degree of repairability for its products. The links to position papers of Brussels-based lobby groups representing several top brands are available here.