A number of countries are blocking EU proposals that would oblige manufacturers to make certain products, including washing machines and TVs, more easily repairable and recyclable, a map published by ECOS and the EEB reveals.

The NGOs reveal the position of each Member State during the negotiations that took place in Brussels over the last 18 months in the context eco-design standards, which would push the most wasteful products out of the market. Countries are expected to vote on whether to adopt such standards before the end of the year.

The European Commission has put on the table proposals to make it easier for consumers to have certain products repaired instead of having to buy new ones. They would trigger substantial environmental benefits by reducing waste and unleashing the potential of job creation in the sector, according to Chloé Fayole from ECOS, co-leader of the Coolproducts campaign, who attended the discussions. “At the moment, consumers are forced to discard products, as repair is made impossible or unaffordable.”

According to their statements during the meetings, Germany, Italy and the UK are currently blocking the proposals, while France, Poland and Spain are either completely disengaged or have adopted a neutral stance. Because of the high weight their votes carry, the proposals are likely to be dropped from the agenda if their positions are not challenged.

Over the last twenty years, the Ecodesign and Energy Labelling policies have already improved domestic and industrial products by making them perform better with less energy. This radically cuts household and business energy bills and lowers the energy intensity of our economies, even as they grow.

Brussels is now trying to take it a step further, to make sure that they also last longer, and are easier to repair and recycle. Proposals on dishwashers, washing machines, fridges, lights, TVs, displays and servers could be adopted by the end of the year. They require that products can be disassembled and reassembled again, foresee mandatory provision of spare parts for several years, of documents and tools necessary for repair, designs that allow an easy access to the parts that could break, as well as provisions towards more cost-effective recycling.

“This would be a big win for consumers, independent repairers, repair cafés, recyclers and the environment. It’s hard to believe someone would actually vote against such improvements in our daily lives.”

“If nothing changes, the ambitious provisions will disappear from legal texts. Europe has the potential to do much but cannot do it without the national governments.” concluded Fayole. 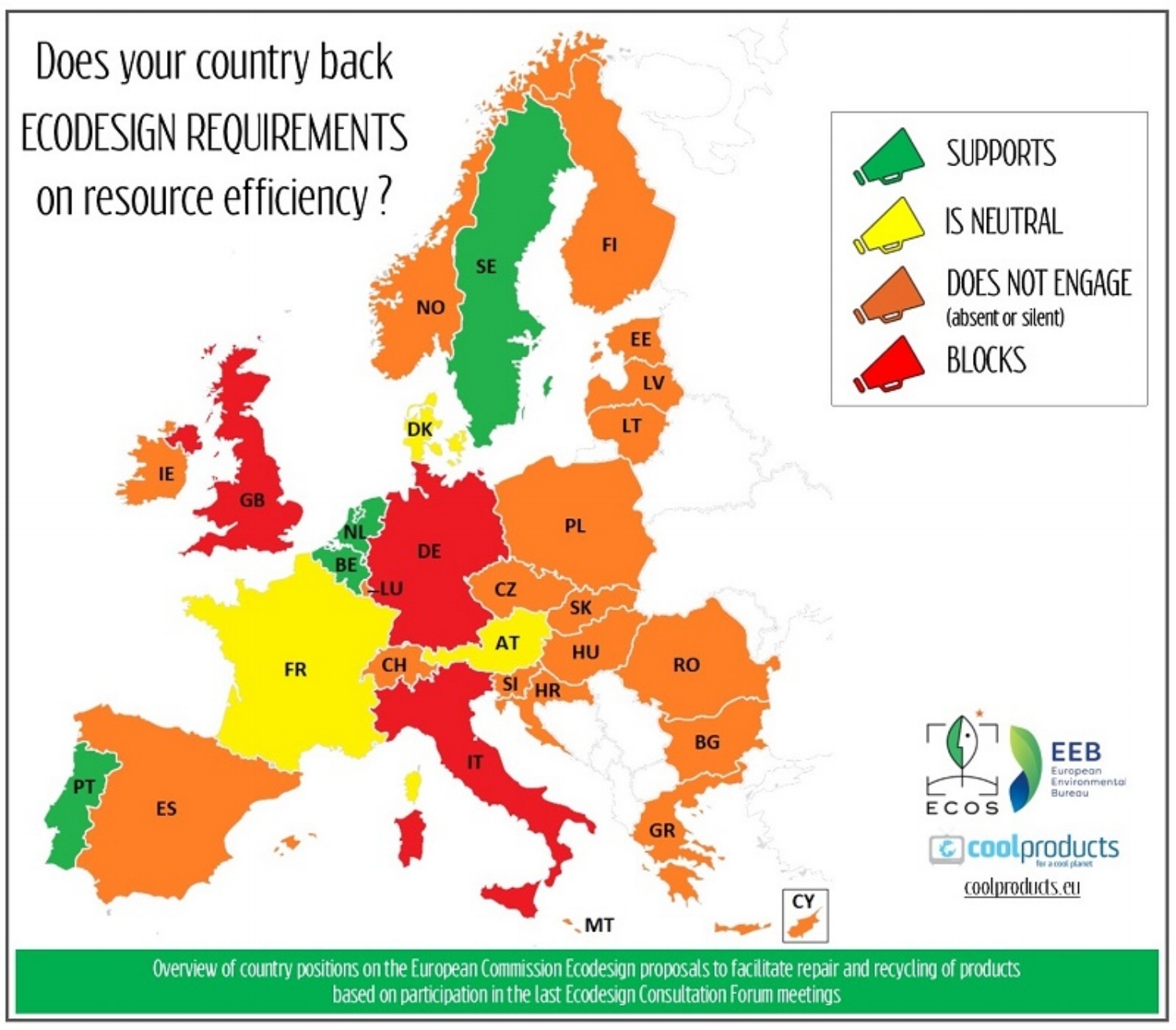 – These measures are adopted under comitology rules, which means they are agreed upon by committee of experts from the Commission and national governments who are meant to take technical decisions. For these proposals to pass, qualified majority is needed, which means at least 16 Member States need to vote in favour, representing at least 65% of the EU population.

– Citizens’ support is there, since 77% of EU consumers would rather repair their goods than buy new ones according to a Eurobarometer Survey 2014. This as consumer and environmental groups have accused big tech companies of shortening the useful lifespan of electronic products in order to increase sales.

– We have analysed how Member States reacted to the Commission’s Ecodesign proposals targeting repairability and recyclability of several products during meetings of the Ecodesign Consultation Forum, an expert group of the European Commission.

– We based our analysis on the minutes of the 10 meetings of the Ecodesign Consultation Forum during which resource efficiency provisions were discussed. We have covered meetings that took place after the release of the Ecodesign Working Plan 2016-2019, which gave a clear turn to the Ecodesign policy.

– ECOS, the European Environmental Citizens’ Organisation for Standardisation, defends environmental interests in the standards development process at European and international level. As part of this, ECOS is heavily involved with work on Ecodesign, providing expert input on all products covered by the legislation.

– The European Environmental Bureau is Europe’s largest federation of environmental citizens’ organisations, with over 150 organisations across 30 countries containing around 15 million members and supporters in total.

– Together ECOS and the EEB lead the Coolproducts campaign, a coalition of European NGOs, working to ensure that energy efficiency labelling and legislation encouraging the environmentally friendly design of new products truly work for European citizens.