Calls grow to stop making smartphones that are designed to break

What if you could upgrade your smartphone or easily repair a cracked screen instead of having to buy a new device?

Coolproducts EU and its national partners launched a campaign to demand that smartphones are designed to last longer and be repaired.

The vast majority of consumers have had to replace their phones for reasons which could have been avoided through better design, Coolproducts campaigners said in a letter to the European Commission.

See Commission’s response to our letter

It’s standard practice for some manufacturers to plan obsolescence into their devices. Experts speculate this may involve efforts to make key components such as batteries difficult to replace and repair, or software upgrades that may not be compatible with older models. 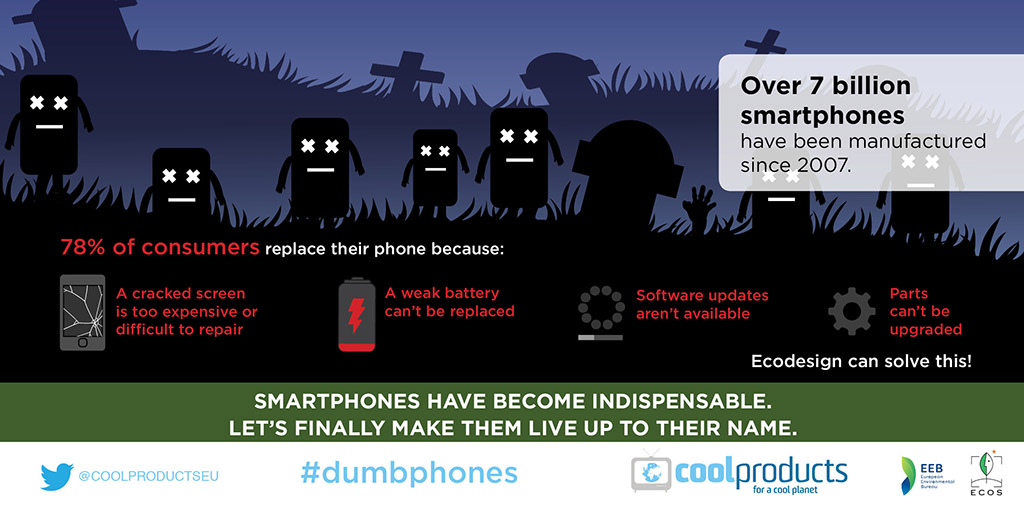 Since 2007, more than 7 billion smartphones have been produced, according to Greenpeace, which said US consumers use a phone for just over two years on average.

Increasing production has put a strain on the world’s finite resources, especially in areas where they may be extracted to finance conflict. A recent study estimated that 70 kg of natural resources are needed to manufacture just one smartphone.

The intensive extraction of natural resources pollutes air, water and soil along the way. Manufacturing, on the other hand, is responsible for almost three quarters of the phone’s total carbon emissions.

But that’s just the beginning of all problems, campaigners said. E-waste is the fastest growing waste stream, accounting for 70% of the toxic waste in US landfills. The 2017 Global E-Waste Monitor report highlighted increasing levels of e-waste and its improper and unsafe treatment and disposal through burning or landfill.

While acknowledging the benefits of smartphones, Honey Kohan from ECOS, a member of the Coolproducts campaign, said:

“We know consumers don’t want to change phones every two years, most are forced to, as the latest planned obsolescence scandal of Apple has proven. Consumers pay good money, and not only expect, but deserve good phones, for them, and the planet.”

An increasing number of countries are looking into whether companies are shortening the lifespan of products with the aim of making customers replace it.

In France, where planned obsolescence is illegal, prosecutors are investigating whether Apple has deliberately slowed down some iPhone models through a software update coinciding with the release of a new model.

But despite growing pressure and some voluntary agreements, planned obsolescence is not a crime in most countries.

The European Commission should also give smartphones an Energy Label, so consumers can find the best products on the market and businesses are incentivised to continue improving their products, Kohan said. The label should indicate a repair rating or a free warranty period to promote their durability.

With Ecodesign and labelling requirements for smartphones, Europe can become a world leader in e-waste prevention, the designer of the ‘indestructible’ Nokia 3310 told Coolproducts campaigners in a recent interview.

Commenting on the possibility of having smartphones regulated under EU product design legislation, Carsten Wachholz of the European Environmental Bureau said:

“The EU must deliver on its promise to improve product design in order to transition to a circular economy, where waste in prevented and materials recycled. It is only fair to ask that consumers are made aware of the possibility to repair their smartphones and that spare parts and repair tools are made available” 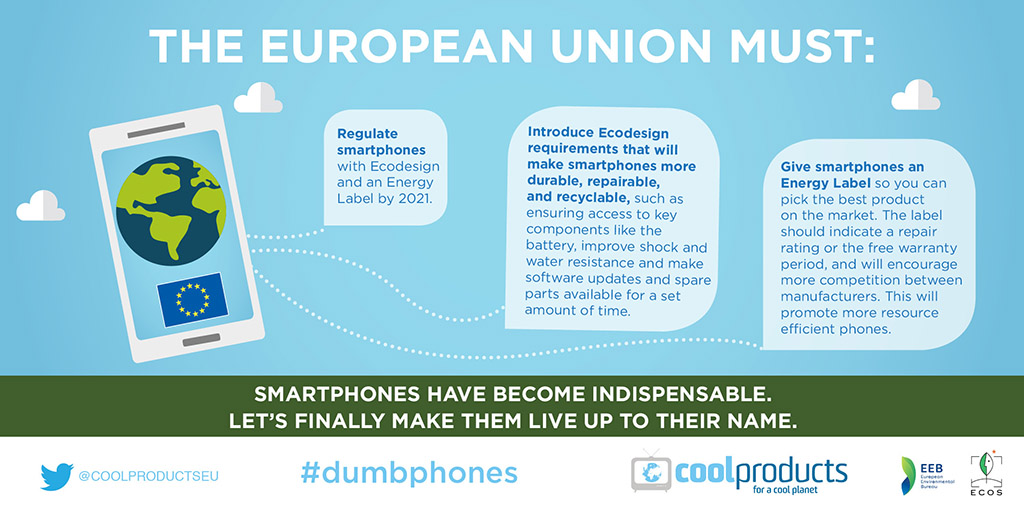